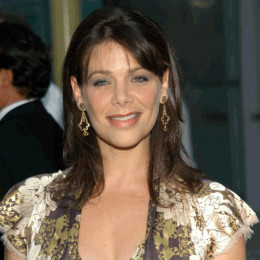 She engaged with her boyfriend comedian Patton Oswalt in July 2017. The couple married on 4 November 2017.

Oswalt mentioned that he's so overwhelmed to have Salenger as his better half. He gave their first-anniversary tribute to his wife via an Instagram post.

Happy one year anniversary, sweetie. Thank you for stepping into the life of a widower who had resigned himself to merely functioning. You reminded me that there’s still sunlight to feel on my skin, that my daughter is amazing, and that life can contain both bitter and sweet. I love you.

In the same way, Salenger also chose the same social media platform to share her love for her husband.

Happy Anniversary my love!!!! I’m so happy I get to spend my life with you and Alice! You are both the light of my life and I am forever full of gratitude that I found you!!!! You are also both maniacs!!! And I love you!!!!!! scroll for maniac kisses I just want to EAT her face off!!!! #FirstYearOfMarriage

Well, the couple is living a happy family love with all the love and care.

Meredith Dawn Salenger was born on 14 March 1970 in Malibu, California.

She gained wide popularity playing her title role in the 1985 movie The Journey of Natty Gann and the teen comedy, Dream a Little Dream.