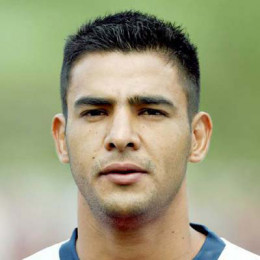 A professional footballer from Costa Rica, Michael Umana, is a very talented and a skillful footballer. He is currently playing for the club Persepolis in the Persian Gulf Pro League and in the Costa Rica National football team since 2004. He is a skillful defender in the team known for his defending skills and fast diving into the ball to tackle. He started his career in 1999 from the club Carmelita. He has played for different clubs after his debut.

Michael Umana is a married man. He tied the knot to his longtime girlfriend, Grettel Umana in 2005.

The couple shares two children, Estefano Umana, and Michelle Umana. Both the husband-wife are living a blissful life without any divorce rumor.

Michael Umana has an estimated net worth of $1million. He makes an annual salary of $60k. His current market value is around $240k.

She is his long time girlfriend and supposedly from his home town. They have two kids together and are living a happy married life.

She is quite young and is very adorable. She attends school and is seen with her parents a lot.

He is very young. He is seen quite a lot with his parents. He is very cute and adorable.