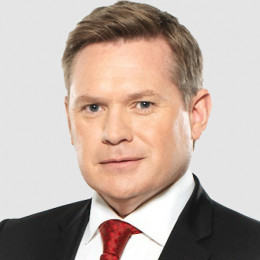 60 minutes reporter Michael Usher is an Australian media personality. Graduating in media, he started his career in media sector at the Golden West Television Network in 1990. He has also reported for Olympic games. Meanwhile, he has lots of credits for various other programs and media presentations. Some notable credits include Today, Nightline, 60 minutes and A current Affair. He has also involved in disclosing investigation reports on various critical issues.

Michael Usher is a married man and is happy with his wife Annalie Usher and children Tom Usher, Alex Usher, and Max Usher. There is no rumor on his former girlfriend though.

He is living a fulfilling family life. His marriage has turned out being a successful one and his partner is really very supportive of his work.

His personal life still remains undisclosed though as he appears to be willing to remain off-topic when it comes to personal credits. He prioritizes his work life.

Michael Usher was born in 1969 in Perth, Western Australia.

He completed graduation from All Saints' College and later joined West Australian Academy of Performing Arts to study media in 1989.

Currently, he is the presenter of Seven News and The Latest: Seven News.

Tom is the eldest son to the couple. He is 11 years old and he has been brought up with care and love.

Max is second child to Annalie and Michael. He is 6 years old and is also the second son to the couple. He is loved a lot by his brother.