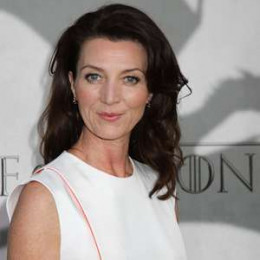 Michelle Fairley is a Northern Irish actress, famous for portraying Catelyn Stark in the critically acclaimed HBO series "Game of Thrones". She is the daughter of publican Brian and Theresa Fairley, a nurse. Michelle Fairley attended the Ulster Youth Theatre, where she was a member of Fringe Benefit, a repertory company. Where she acted alongside Conleth Hill, with whom she would later appear in television juggernaut 'Game of Thrones'. She was nominated for an Olivier award for her role in "Othello".

Michelle Fairley has a daughter named Hermoine Jean but the child's biological father is unknown. She has managed to stay away from the limelight when it comes to her personal matters. Currently, her relationship status is not yet confirmed and possibly single. No record of her facing controversy in her personal or professional life has been recorded till date.

Michelle Fairley has a daughter named Hermoine Jean. There is no more information about her father's name and her date of birth.