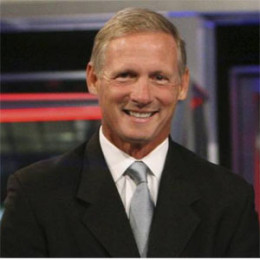 Former American professional footballer, Mike Mayock is currently working as a game analyst for NBC and is working as a broadcaster as well. While still a player, Mayock was linked to several teams like Pittsburgh Steelers, Toronto Argonauts, and New York Giants. Mayock is a married man and is a proud father two children.

Mike Mayock was born Michael Francis Mayock on 14th August 1958 in Philadelphia, Pennsylvania under the birth sign Leo. His parents, Mike Mayock Sr. (a former football player for Villanova) and his mother raised him. Mayock is American by nationality and belongs to White ethnicity.

Mayock studied at The Haverford School in Haverford, Pennsylvania and later graduated from Boston College.

Mike Mayock began his playing career while in college. He played for his college football team and later was selected by the Pittsburgh Steelers in the 1981 NFL Draft.

In the 1981 season, Mayock signed a contract with Toronto Argonauts after being cut by the Steelers. After playing only one game, he returned to NFL with the New York Gaint and played in the 1982-82 season.

Mike Mayock after leaving football began to call college football games for Fox Sports Net in the 2000 season and later shifted to CBS Sports as one of the members of the broadcasting team.

From 1993, Mayock began to work as an analyst and a sideline reporter for the Canadian Football League and college football for ESPN and CBS. In 1997to 1999, Mayock also worked as a reporter for the NCAA basketball tournaments in CBS.

Since 2005, Mayock joined NFL Networks as a football analyst and a host of the show, Path To The Draft. Two years later, he appeared as a color commentator for the Minnesota Vikings in 2007 season.

Mike Mayock is private when it comes to his love life. He revealed only limited information about his life to the media. However, as per the available information, he is a married man. But till today he has not revealed the name of his wife.

The couple together shared two children one boy and a girl named, Mike Moyock and Leigh Moyak, He often talks about his children on the social media on various occasions. Mayock’s son is also a football player like him and is playing for Villanova.

Mike Mayock, 53, earned a decent sum from his career as a football player and an analyst. However, his exact earnings and net worth are not public.

As per ABC Networks, the average yearly salary of an analyst is more than $88k and as per NFL, an analyst makes $89k.

Leigh Mayock is the older child of Mike Mayock and her wife. Her father updated a birthday wish in twitter mentioning her on 20th January.

On June 27, 1990, Mike Mayock and his wife welcomed their second child and named him as Mike Mayock. Currently, he plays football for the football team, Villanova.