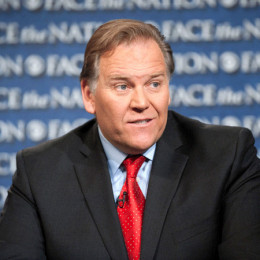 Michael J. Rogers commonly known as "Mike Rogers" is a CNN National Security Commentator. From 2001-2015, he served as a U.S. Representative for Michigan's 8th congressional district. He is the son of John C. Rogers, a public school teacher-administrator-football coach and Joyce A, director of a local Chamber of Commerce. In 1985, he got graduated with a bachelor's degree in Criminal Justice and Sociology from Adrian College.

Talking about his personal life, till now he has been married twice. It is unknown when he got married to his first wife but he separated with her in 2007. They have raised two children: a son and a daughter. He is now married to a lady who serves as the Managing Director and CEO of Aspen Healthcare Services. Currently, the family resides in Howell, Michigan.

She is the first wife of Mike, whose personal details has not been disclosed to the media yet.

She is the second wife of Mike, who serves as a CEO and Managing Director of Aspen Healthcare Services.

She is the only daughter of Mike, who was born healthy.

He is the only son of Mike, born safe and sound.