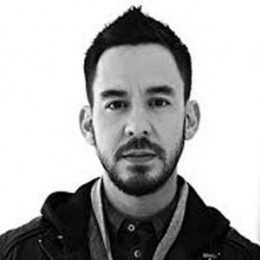 Mike Kenji Shinoda is an American musician, singer, songwriter, rapper, record producer and graphic designer, well known as therapper and co-singer of one of the most popular band Linkin Park. Mike Shinoda is married to his longtime girlfriend Anna Hillinger. The couple married on 10th May 2003.

Mike Shinoda was born on 11 February 1977 in Agoura Hills, California, and grew up there as well. His father is Japanese and has a younger brother named Jason.

He was raised in a liberal Protestant. Mike's mother supported him to take classical piano lessons when he was six years old. By the age of thirteen, he expressed the desire to move toward playing, blues, jazz and even hip-hop.

Three boys together formed the band named Xero and started to make a more serious attempt to pursue a career in the music industry. After his graduation, Shinoda jumped into the Art Center of Design and Pasadena to study graphic design and illustration. He graduated in the year 1988 with a Bachelors of Arts in Illustration and gained a job as a graphic designer.

When the band was unable to find a record a deal, Farell and Wakefield left the band to achieve other musical interest. Later the band recruited Chester Bennington and landed successfully with a record deal with Warner Bros.

Mike is very closely involved in the technical aspects of the band's recordings, and over the subsequent releases, that role continued to expand.

The band released their another album 'Minutes to Midnight on 14 May 2007. On this album, he shared a production credit with longtime producer Rick Rubin. The was the first album that Shinoda, best known for his rap, sang a featured vocal.

The album featured more of his singing than the rapping experience. Later, on 26 June 2012, Linkin Park released their another album 'Living Things', with many catchy songs.

In 2014, Mike Shinoda worked with Delson to produce the band's sixth studio album 'The Hunting Party', released on 17 June 2014.

Later in 2017, Shinoda again worked with Delson on the production of 'One More Light.' The album is first to feature other songwriters rather than the band itself.

Mike Shinoda has also worked as a music producer for other groups and artists. In the year 2002, Mike and Joe Hahn collaborated with the X-Ecutioners to produce and perform their single 'It's Going Down.'

Linkin Park has succeeded in multi-platinum record sales, Warner Music Group gave Shinoda his own record label in the year 1999. It was known as The Shinoda Imprint. He along with his bandmate Brad Delson together worked on the label in 2004 and later renamed it to Machine Shop Records.

Mike Shinoda is a third-generation Japanese American. His aunt and father were forced to live in a Japanese-American Internment Camp during World War II.

Mike Shinoda is married to his longtime girlfriend Anna Hillinger. The couple married on 10th May 2003. They have a son together named Otis Akio Shinoda (Born in 2009).

Mike Shinoda earns a huge amount of money as a musician, record producer, and artist and is a well-known member of the rock band Linkin Park, and the band has given numerous hit tracks.

Shinoda's current net worth is estimated to be $ 23 million.

Mike Shinoda is married to his longtime girlfriend Anna Hillinger. The couple married on 10th May 2003

Otis Akio Shinoda was born in 2009, first child of Mike and Anna.