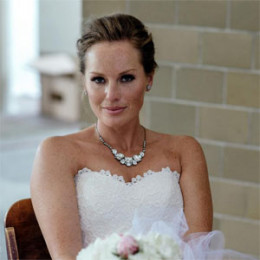 An American real estate agent, Mina Starsiak is popularly known from the reality show, Good Bones of HGTV after which she along with her mother rose to fame. She began her career from renovation business and later opened a real estate business. Apart from being good in her profession, she is also a caring mother and a loving wife.

Mina Starsiak was born Mina Nicole Starsiak on 26th November 1987 in the United States. She is an American and belongs to White ethnicity. She grew up along with her seven siblings. Her parents divorced when she was very young.

She finished her schooling from one of the local schools of Indiana, USA. Starsiak then studied business and sociology at the University of Indiana.

Starsiak began her career as a businesswoman along with her mother, Karen Laine. She involved in the real estate and the home renovation business. In 2007, she got a contract to renovate a house, her first task, in which her mother helped her. Then they both opened their own real estate company named, Two Chicks and a Hammer.

Moreover, to flourish her business, she joined Twitter from 2015 and got more than 1260 followers until today. She then became active on other social media as well. Starsiak and her mother eventually rose to fame only after appearing on the reality TV show, Good Bones of HGTV.

It is a TV show where they renovate houses. She along with her mother is earning much of the fan following from the show.

Mina Starsiak is married to her longtime boyfriend, Stephen Hawks since 11th June 2016. They tied the knot in Indianapolis in a low profiled ceremony attended by their close ones. She wore a beautiful mermaid-style Romona Keveaz and topped it all off with swept-back updo and veil that suited her perfectly.

The couple till today is living a blissful married life with no buzz about their divorce and extramarital affairs. They have no biological children, but they have adopted an adorable baby girl named, Julia.

In 2018, the husband-wife couple welcomed their second child. Their only son Jack Richard was born in 2018.

Aaaand we’ve got a baby #babyhawk

Apart, the star is active on social media.

The 30-year-old real estate agent is currently flourishing her business in many of the places from which she might be collecting a good net worth. However, the actual figure is yet to be shared with the public. Her net worth is around $200 Thousand to $500 Thousand.

She owns a company along with her mother which is her primary source of income. Also, her renovating business is also contributing some portion of her income.

Apart from all this, the secret of her stardom, the TV show is helping her to make money in a short time. The show has millions of viewers and fan followings.

On 11th June 2016 in Indianapolis, Mina Starsiak married her longtime boyfriend, Stephen Hawk. They are still together with no such rumor about their separation.

Julia is the adopted child of Mina Starsiak and Stephen Hawk.