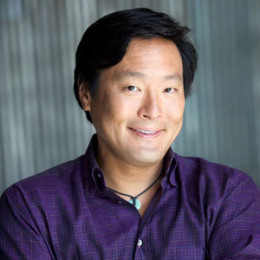 Ming Tsai was eliminated in week 7 of the third season of the Food Network's cooking competition "The Next Iron Chef". Tsai is a married man and married to Polly Tsai in the year 1996. The couple has been blessed with two sons named, David and Henry, who are named after Chinese-American playwright David Henry Hwang. Ming Tsai is living his life very happily with his family so there are no signs of divorce.

Ming Hao Tsai was born on March 29, 1964, in Newport Beach, California. His parents are Stephen Tsai, an engineer, and Iris Tsai, an eventual restaurateur. He was raised in Dayton, Ohio, where he attended The Miami Valley School. He assisted with the cooking as he was growing up in the restaurant owned by his mother, Mandarin Kitchen.

Tsai later attended Phillips Academy in Andover, Massachusetts, and then proceeded to study engineering and play varsity squash at Yale University. He graduated with a degree in mechanical engineering in 1986.

Moreover, he received a master's degree in hotel administration and hospitality marketing from Cornell University in 1989. He also attended culinary school at Le Cordon Bleu in Paris.

Tsai began his television career on chef Sara Moulton's cooking show Cooking Live while she had him fill in for one week for her in 1997. He hosted East Meets West on the Food Network from 1998 to 2003.

In June 2017, Tsai closed Blue Ginger after 19 years of business. He won the Daytime Emmy award in 1999, in the category Outstanding Service Show Host.

Ming Tsai and Polly Talbott Tsai are married since April 1996. They have two children, both sons, named David Tsai and Henry Tsai. David Talbott, Tsai's squash coach at Yale, and Mark Talbott, a former World No. 1 hardball squash player, are Tsai's brothers-in-law. Tsai is a 116th-generation descendent of Huang Di.

Tsai was a squash player at Yale, playing number two for the team. He was named as an All-Ivy League player in 1986. While attending culinary school in France, he played professionally on the European circuit.

In 2004, Tsai played a celebrity squash match against professional golfer Brad Faxon at a Boston squash club. In 2005, he played against Mark Talbott in a charity match at a squash club in San Francisco.

One of Ming's sons has food allergies and he became a food allergy advocate who promotes awareness of food allergens. By 2005, he was a national spokesman for the Food Allergy & Anaphylaxis Network (FAAN).

In December 2012, Ming was awarded a lifetime achievement award for his advocacy work from the organization, including his work on the state of Massachusetts food safety bill.

As of 2018, Ming Tsai's net worth is estimated to be $10 million. His source of income includes his salary and earnings from his career as an American restaurateur, television personality, and celebrity chef.

Back in 2017, he decided to close down the restaurant that made him what he is, Blue Ginger. The restaurant was a fusion restaurant which offered a host of allergen-free options. It was located in the suburban Wellesley, Massachusetts for around 19-years.

Tsai is a married man and married to Polly Tsai in the year 1995. The couple has been blessed with two sons.

The couple has been blessed with two sons named, Dav id who is named after Chinese-American playwright David Henry Hwang.

The couple has been blessed with two sons named,Henry, who is named after Chinese-American playwright David Henry Hwang.