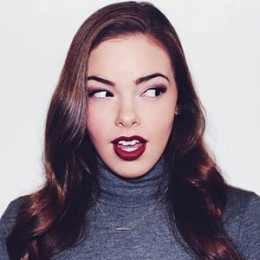 Facts of Miranda May

Relationship short Statistics of Miranda May

Miranda May is an American actress, well known for her appearance as a Disney star as of 2015 after portraying in few episodes of Liv and Maddie.

Miranda May was born on 6 April 1996 in Bowling Green, OH, U.S.A. She was home schooled. She is the youngest one among her four siblings.

She began acting since her early age of eight. Soon after shifting to Los Angeles at the age of ten, she was cast in 'The Heartbreak Kid' starring Ben Stiller. She made an impressive follow-up debut in Lower Learning portraying as Eva Longoria.

From a young age, she has exuded a passion and skill for stand-up Comedy and has showcased her talents in impressive venues such as the Hollywood Improv, Brea Improv, and Harrah's Hotel in Las Vegas.

May's professional career began in the year 2015, recurring on Disney Channel's  Liv and Maddie, portraying as the adorable and kooky Spacey Lacey.

Miranda May has maintained secrecy about her love affairs and dating life. She is 21, currently and yet no rumors about her having a boyfriend has emerged yet. May be she is fully focused on making her career. She is possibly single right now.

Miranda has appeared in various movies and television series from which she has managed to collect an estimated net worth of $ 900,000.