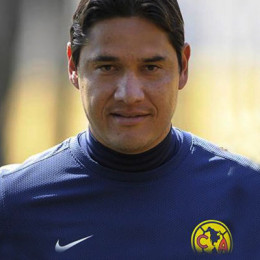 A professional footballer from Mexico, Moises Alberto Munoz Rodriguez, plays from the position of Goalkeeper in the club América of the Liga MX and in the Mexico National Football Team wearing jersey number 23. He had scored a goal for his club which is unlike most of the goalkeepers who scores. He had started his professional career in 1999 from the club Monarcas Morelia . He is known for his accuracy and aerial ability and noted for long clearances and passes.

He is a married man. He is married to his long time girlfriend whom he loves very much. He has two children from his wife. He has been loyal to his wife. He loves to spend his time with his wife and children. He has not been pulled in any women related rumors or scandals. He loves his privacy and keeps his personal life out of professional. He is rumored during the transfer season on his transfer.

She is his girlfriend and supposedly from his hometown. They are living happily together and has two children together.

He is quite grown up and attends school. He is also passionate in football as been inspired from his father.

He is the youngest member in his family. He is quite grown up and attends school with his older brother. He is loved by all in his family.