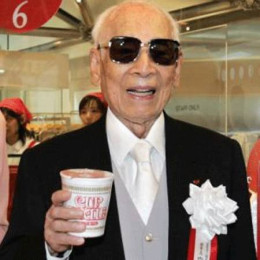 He was a successful businessman best known as one of the inventor of Cup Noodles, instant noodles and instant ramen. He was the founder of Nissin Food Products Co., Ltd. He was born to a wealthy Taiwanese family and was raised by his grandparents. He was honored by the Japanese govt. with Gold and Silver Star, The Order of the Rising Sun, Second Class and many more.

Moving on to his personal life, he was married to his girlfriend. They were totally satisfied and happy during the time they were together, but he died sadly due to heart failure at the age of 96 at a hospital located in Ikeda, Osaka Prefecture. From his marriage he has two sons and a daughter. He was married only for one time. He served two years in jail for being convicted of tax evasion in 1948.

She is the first and the only wife of Ando. The couple have three children: 2 son and a daughter from their marriage.

He is the first child born to Ando and his wife. His date of birth is unknown.

He was born in 7 October, 1947. After his father's death, he has been serving as the president and CEO of Nissin Foods Holdings Co. Ltd..

She is the only daughter born to Mr and Mrs. Ando. Personal details about her are still unknown.