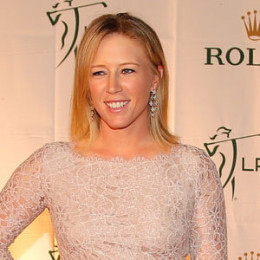 An American professional golfer, Morgan Pressel is currently married to Andrew Bush since 2013. She was born to parents Mike Pressel and Kathy Krickstein Pressel. Morgan Pressel attended Banyan Creek Elementary School, Omni Middle School, and graduated from the Saint Andrew's School in Boca Raton in 2006. Pressel made her first hole-in-one as a professional golfer on July 15, 2007, at the Jamie Farr Owens Corning Classic at Highland Meadows Golf Club in Sylvania, Ohio.

Pressel finished her amateur career as 2005 Girls Rolex Junior Player of the Year. She also represented Wasserman Media Group and has endorsement deals with Callaway Golf, Polo Ralph Lauren, Royal Bank of Canada, and Audemars Piguet. Pressel married Andrew Bush, a senior vice president at Octagon Global Events, in January 2013. The two met at a pro-am event in 2007. The couple seems to very happy with each other so there are no signs of divorce.

Morgan Pressel was born on 23rd May 1988, in Tampa, Florida. Her parents are Mike Pressel and Kathy Krickstein Pressel in Tampa, Florida, U.S. She went to Banyan Creek Elementary School and Omni Middle School.

Later, Pressel attended Saint Andrew’s School where she graduated in 2006. Her mother passed away due to cancer in September 2003. At the age of 15, she moved in with her maternal grandparents, while her two younger siblings stayed with their father.

Morgan Pressel became the youngest player to qualify for the U.S. Women's Open as a 12-year-old in 2001. She was the 2005 American Junior Golf Association (AJGA) Player of the Year and won the 2006 AJGA Nancy Lopez Award.

Morgan turned pro aged 17 and is the youngest-ever winner of a modern LPGA major championship, which vaulted her to a career-high fourth in the world rankings.

Pressel is a happily married woman. She took wedding vows with her husband Andrew Bush, who is a senior vice president at Octagon Global Events. The couple first met at a pro-am event in 2007.

The couple was spotted in numerous places spending cozy moments prior to their marriage. After dating for six years the couple married on 19th January 2013, in a lavish wedding ceremony in Sunny Beach, Florida.

Pressel resides in Boca Raton, Florida with her spouse and they are enjoying their married life together. The couple does not share any children yet.

Morgan Pressel has an estimated net worth of $10 million. Her source of income includes her salary and earnings from her career as a professional golfer. Moreover, she has endorsement deals with Polo Ralph Lauren, Royal Bank of Canada, Callaway Golf and Audemars Piguet.

. Pressel married Andy Bush, a senior vice president on January 2013 at Octagon Global Events. The two met at a pro-am event in 2007.The couple seems to very happy with each other so no signs of divorce.