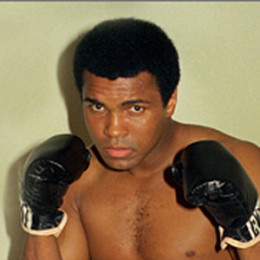 Muhammad Ali was an American professional boxer and activist, He was son of Cassius Marcellus Clay Sr.(father) and Odessa Grady Clay(mother). Ali discovered his niche for boxing at an early age of 12 through an odd twist in fate, his bike got stolen so, he express his desire to beat up the thief to police officer Joe Martin. later on Ali began to train with Joe and soon began his boxing career.

Ali was married for four times, his first marriage was with Sonji Roi, they got married on August 14, 1964. This marriage was childless and ended on January 10, 1966. Then he was married to Belinda Boyd on August 17, 1967, Ali had four children from his second marriage, Maryum "May May" born on 1968, twins Jamillah and Rasheda born on 1970and Muhammad Ali Jr. born on 1972. Ali began a relationship with the 16 year old Wanda Bolton with whom he had another daughter, Khaliah born on 1974. In 1975, Ali began an affair with Veronica Porché an actress and model they had a baby girl, Hana. Their second daughter Laila Ali was born on December 1977. On November 19 1986 Ali married Yolanda "Lonnie" Williams. Together they adopted a son, Asaad Amin

Ali and Sonji got separated because, they quarrelled over Sonji's refusal to adhere to strict Islamic dress and behavior codes, and her questioning of Elijah Muhammad's teachings

His second marriage ended because of his extra marital affair with his girlfriend Veronica Porché, who later on became his third wife.

Their marriage lasted less than a decade, with his third wife he had two children, Hana and Laila Ali