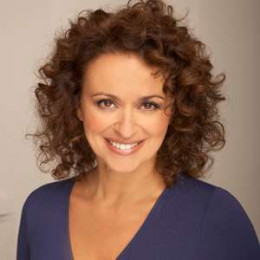 Nadia Sawalha, an English actress, and a television presenter, is mainly known for her role as Annie Palmer in the BBC One soap opera "East Enders" from 1997 to 1999. Sawalha was born to father Nadim Sawalha, a Jordanian-born English actor, and mother Roberta Lane. She is the sister of television actress Julia Sawalha. After winning the 2007 series of Celebrity MasterChef, Sawalha has been making appearances on cookery shows, not only as a presenter but also as a chef. She has also appeared on ITV Daytime show Loose Women on and off since its beginning. After training at the Italia Conti Academy of Theatre Arts, Sawalha began her career in theatre. Sawalha starred in the fifteenth series of Celebrity Big Brother on Channel 5.

Nadia Sawalha has worked on some of the most popular movies including Clockwise, The Vanishing Man, Station Jim, Abraham and Solomon & Sheba. Nadia has been married twice and has two children, both of them daughters. Sawalha's first husband, Justin Mildwater, committed suicide after few months of getting separated. Apparently, Justin's family blamed Nadia for his suicide as she had left him for someone else. She remarried five years later. Sawalha has suffered from psoriasis and has used homeopathy for treatment.

Justin Mildwater was an American musician. After about five years of marriage, they divorced. After five months of divorce, Justin committed suicide.

Mark Adderley is an American TV producer and an actor. They have two children together, both of them daughters.

Maddy Adderley Sawalha is the first daughter of the couple. She was born on Christmas day.

Kiki is the second and youngest daughter of Nadia born on August 2007. She is a cute kid with blonde hair.