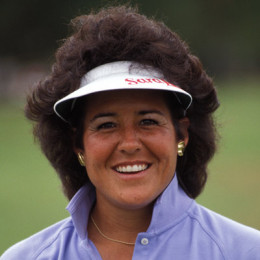 She is a legendary and a very talented American professional golfer. She is the member in the LPGA Tour since 1977. She has won 48 LPGA Tour events tin her career. She has won three major championships as well. She is very renowned and much appreciated female golfer. She has been inducted into the World Golf Hall of Fame in 1987. Not much information is available on her childhood. She began her amateur career at the age of 12 with the support and guidance from her father.

She is a married woman. This is her second marriage. Her previous marriage did not last long due to some misunderstandings. She has no children from her first marriage but has three children from her current husband. They are living very happily and peacefully. All her children are now grown up. She has not disclosed much of the information about her personal life in the public knowledge.

Professional golf player Nancy Lopez was born on January 6, 1957, in Torrance, California to Mexican-American parents. She belongs to the white ethnicity and holds American nationality.

She is widely recognized as the LPGA golfers of all time.

She began her golfing career at the age of 8, with her father Domingo Lopez, an avid golfer, as her coach.

And after four years later, she became the name of golf as she succeeds to win the New Mexico Women's Amateur (1969) and many other several titles.

In 1976, Lopez was given the name of "All-American and Female Athlete of the Year" for her play at the University of Tulsa.

She has appeared on the cover of  Sports Illustrated in the 1978 issue. Lopez was inducted into the World Golf Hall of Fame in 1987.

Nancy was a member of the United States Solheim Cup team in 1990 and was captain of the team in 2005.

She has her own company named 'Nancy Lopez Golf' which made the full line of women's club and accessories. Occasionally she also does television commentary.

Lopez is one of the fewest female athletics who won Player of the Year Award four times and more than 48 victories over the course of her career.

She is the first woman to receive the Frances Ouimet Award for lifelong contributions to golf, LPGA Rookie of the Year and Vare Trophy in the same season (1978).

The late 1970s and 1980s were best years for the Lopez as she succeeds to grab the many achievements.

Hall of fame golfer was married to Tim Melton (Houston sportscaster) in 1979 but due to the personal differences, the duo part ways in 1982. Lopez didn't have any children with him.

In 2009, the duo ended their 27 years long married life in divorce but prior to their split, the couple lived happily with their daughters in  Albany, Georgia.

Well, today Nancy and Ray are not together but still, they shared a friendly equation with each other.

The 60-year-old retired golfer is a real winner as she succeeds to earned more than $5 million dollar prize money during her career.

Without a doubt, she has a glorious career and she might have million dollars of net worth. However, her estimated salary is 42,000 USD.

He is a sportscaster and her first husband. They have no children together. Due to some misunderstanding they got divorced from their 3 years of marital life.

He is a former Major League All-Star baseball player. It is speculated that, she has an extra marital affair with him that led her first marriage to ruin. Shortly after she got divorced, the two got married. Some site reports they are still together while some reports they got divorced in 2009. They have two children together.

She is all grown up. She is very beautiful and loves her parents. She is also a fan of golf.

She is also grown up and busy in her own activities. As her parents both are sportsmen, she has also some interest on sports.

She is the youngest member in her family. She is grown up and busy in her activities.