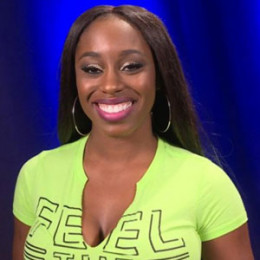 Trinity Fatu (McCray) is an American professional wrestler, actress, model, dancer, and singer. Trinity performs on the SmackDown Brand where she is the current and longest reigning SmackDown Women�s Champion in her second reign. Trinity was ranked no 7 in the Pre Wrestling Illustrated Female 50 in 2015. Naomi is known for tackling her opponent down to the ground and putting them in a leg lock.

Trinity was born in Sanford, Florida. She served as a cheerleader and dancer for the NBA Orlando Magic basketball team franchise from 2007 to mid-2009. Trinity also started as a background dancer for rapper Flo Rida.

Her dream was to be a dancer and started dancing at the age of 8. Her goal was to join Alvin Ailey School of Dance after high school, but at that time her family didn’t have enough money, and even she was afraid to leave home, so she auditioned for the Orlando Magic as a Dancer. Then the WWE show and Divas came to Orlando and from where her journey to WWE Diva started,

Trinity signed with World Wrestling Entertainment (WWE) in August 2009 and was assigned to Florida Championship Wrestling(now NXT), where she became FCW Diva Champion. Trinity took part in the all-female third season of NXT. She came second under the tutelage of Kelly Kelly.

In January 2012. Naomi made her main roster debut joining Cameron in forming The Funkadactyls and also becoming a backup dancer to Brodus Clay and Tensai. In 2013, they both were nominated and awarded with Slammy Awards for Best Dance Moves of the Year.

Trinity formed an alliance with Tamina in May 2015 and later joined by Sasha Banks forming trio Team B.A.D.

In 2017, Noami won her first WWE SmackDown Women’s Championship title at Elimination Chamber, but she was forced to abandon the championship nine days later due to an injury sustained during the match. She returned at WrestleMania33, where she regained the title.

Noami has also appeared on the reality television show Total Divas produced by WWE and E! which aired in July 2013. In May 2014. Noami released her first single song entitled “Dance All Night” and the accompanying music video released on WWE’s YouTube channel. Naomi has featured in five WWE video games.

Trinity is married into one of the greatest wrestling family in the history. She got hitched to her long-time boyfriend Jonathan Fatu known by his ring name Jimmy Uso. Jimmy’ twin brother Joshua served as the best man in their wedding.

The husband and wife met in 2009 during their match. They tied the knot in Maui on January 16, 2014. This couple resides in Orlando, Florida. Trinity is the stepmother to Fatu’s two children. This couple does not have children to the date.

The pair is happy together, and there is no sign of them getting a divorce anytime soon.

Being one of the famous WWE Diva, and ranked no. 7 among top 50 Women Wrestler, Noami's salary must be huge. However, her actual figure of earning is not disclosed yet. Her husband has the net worth of 0.3 million. Their lifestyle is standardized and luxurious.

Talking about Jonathan aka known as Jimmy, his marriage to Noami is not his fist relation, Though there is no news on Jimmy first relation, he is the father to two children making Noami their stepmom. Jimmy and Noami met around 2009 and since then their relation took off. They married in 2014 after dating for a long time. Till date, the pair has no children.