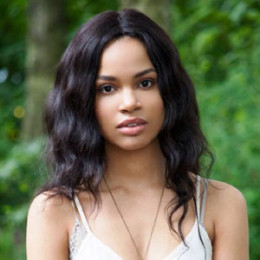 Nesta Cooper was born on 11 December 1993, Mississauga, Toronto Ontario, Canada. At the age of seven, she shifted to Courtenay, Vancouver Island with her parents.

Cooper has a mixed ethnicity of African-Canadian and holds Canadian nationality.

Cooper's career began by portraying in minor roles in various movies and drama series from a very early age. In the year 2011, after she moved to Vancouver, Cooper signed a contract with an agent and continued her course in acting.

She had given the audition, from where Nesta got her first film 'Diablo,' which made her earn television series including The Returned, The 100, Girlfriends Guide to Divorce, and UnReal.

Moreover, she has also appeared in a TV Series 'Motive' in the year 2016, the same year she made her appearance in 'The Edge of Seventeen.'

Talking about her personal life, Nesta Cooper has maintained low profiled. But judging by her Instagram profile, it suggests she is reportedly dating a guy named Peter Van Auker.

At first, many people were looking at them as just good friends but later it turned out to be more than that. In many of her posts with him, she is sharing how much she loves him and misses him.

In one of the posts when she was going out of town for a few months, she posted a picture with him and stated how she will miss him.

Next week I’m leaving LA to film for 8 months. I’m so grateful for this sweet boy for helping me navigate the worst time of my life. Thank you for loving me through all the ugly, for ~literally cooking for me every day, for playing with my hair while we watch baking shows, for waking me up from nightmares to kiss me til I’m back asleep, for making me laugh every second, and for endless cuddles. You are really the best person I have ever known. Your heart is bigger and better than this world will ever deserve. Thank you for giving me someone to miss horribly while I’m away. I love you.

The lovebirds are going quite strong at the moment and look like they might even walk down the aisle sooner than later. She even called him the "King of All Boyfriend."

Nesta Cooper earns a decent amount of money from her acting career as she has appeared in numerous movies and TV Series. One of her film 'The Edge of Seventeen' earned a box office of $ 18,803,648.

Cooper's current net is estimated to be in a million dollars. However, the exact amount has not been revealed yet.