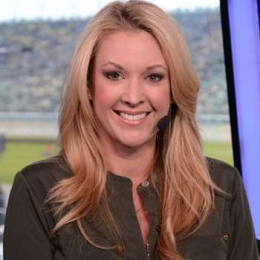 She is an American sportscaster, currently working for ESPN. Previously, she was focused on covering auto racing for the network, which included stints as the host of NASCAR Countdown and NASCAR Now. She became a SportsCenter anchor in 2015. In addition to that, she is also the title holder of Miss Illinois Teen USA of the year 1998 and was listed as a semi-finalist within Miss Teen USA of the same year.

Talking about the love circles and love zones of Nicole it has been seen not so opened in the matter of her boyfriend and her past affair during her college and high school times. It has been dictated that she is married by now and her husband is her long time dated boyfriend, who is an IndyCar Series Driver. As the two have a perfect chemistry with one another there is no chance of their divorce to happen.

An Australian professional racing driver, Ryan is the long time dated boyfriend turned husband of Nicole. They are married since 2009.