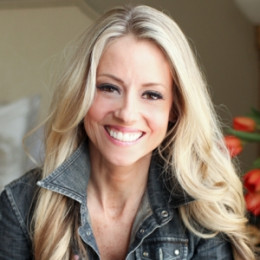 Popular American anchor of the TV show named home renovation show “Rehab Addict “ on HGTV. According to her her family owned garbage business. She also attended her college in Georgia, Florida, and Michigan. Her real name is Nicole Lynn Curtis. She is very popular for her advocation for restoration and also the preservation of existing architecture over demolition when reliable. She has already rehabbed homes in Michigan, Detroit, Ohio, Minneapolis, etc.

Nicole Curtis was born in Lake Orion and Michigan. She holds an American nationality and belongs to the white ethnicity. Mostly she states her early life was not as interesting as of now but surely happy.

Curtis completed his graduation from Lake Orion High school in 1994 and started working in Hooters to join college. Later she joined different college of Michigan and Florida but leave it without completing it to open cleaning business.

In her early days, she used to serve as a waitress in Hooters, she had a chance to serve many CEO's and eavesdrop on them and gained some ideas.

Nicole began her career as a realtor was for Minneapolis broker. Later she was offered the show with "Rehab Addict" which first show was premiered on October 13, 2010.

Nicole seems to have a profound knowledge of the architecture of houses older than 1800 to now. She is capable of reviving the almost destroyed houses to their original shape.

She founded Nicole Curtis Foundation whose main purpose is to raise funds for a charity for a cancer patient and fallen American soldiers. She also works with LeBron James promise foundation for helping many victims.

Her company was sued by the City of Minneapolis claiming that she failed to renovate the house that she bought for $2 in 2013. However, it was settled later in the starting of May 2017.

Nicole Curtis is possibly single at the moment but previously she married to Steve Lane. The couple tied the knot at an intimate ceremony in the presence of their closed ones and family members. However, they failed to handle their marital relationship and divorced in 2009.

The former couple shared a son, Ethan but she raises him alone. In 2016, she posted a picture on her Instagram where she clearly flaunts her baby bumps but she never gave a clear statement regarding this topic.

There was a rumor that she was arrested for trying to stop the demolition old house in Minneapolis which was about a 124 year.

Curtis has been very actively working as the Television producer and has gained huge popularity from her show. The net worth of the Rehab Addict host is believed to be $5 million.

He was her high school boyfriend. They got married but the relation could not sustain long and they got divorced.

He was born before she graduated from her college. They are living together in renovated home located in Detroit.