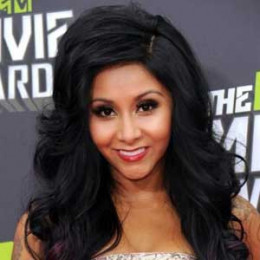 WWE Slammy Award winning dancer, Snooki is well known as a reality television personality, author, and professional wrestler. She is best known for being a cast member of the MTV reality show 'Jersey Shore' and starring in Snooki & Jwoww. Nicole appeared as the guest hostess for WWE Raw in 2011 and competed at WrestleMania XXVII that same year. She is known for her wild behavior and unique fashion sense. She also competed on 'Dancing with the Stars.'

Nicole Elizabeth "Snooki" LaValle born as Polizzi was born in Santiago, Chile on 23rd November 1987. She was adopted when she was six months old and was raised by Italian-American parents. Polizzi's father is a volunteer firefighter, and auto-salvage supervisor and her mother is an office manager.

Nicole grew up and attended school in Marlboro, New York, where she was a cheerleader. She enrolled in a community college after graduating from Marlboro High School, studied veterinary technician. During her childhood, she suffered from an eating disorder, at one point weighing 36 kg.

MTV first introduced Snooki in 'Is She Really Going Out with Him?', a show that focused on women dating obnoxious or arrogant men. She joined the reality TV series 'Jersey Shore' after being scouted by the casting director, Josh Allouche, an employee of Doron Ofir Casting.

She worked as a presenter at the 2010 CMT Music Awards. On 27th July 2010, the cast of Jersey Shore appeared at the New York Stock Exchange, and Nicole rang the opening bell.

Snooki made an appearance on the 28th March 2011, episode of 'WWE Monday Night Raw' in a segment where she introduced Trish Stratus to the Jersey Shore.

In January 2011, her book, 'A Shore Thing,' was released. Her third novel, Gorilla Beach, a sequel to Polizzi's first novel, A Shore Thing released on 15th May 2012.

Snooki also starred with Jwoww in the show Snooki & Jwoww, a show about their life.

The couple has a son named Lorenzo Dominic LaValle born on 26th August 2012. Their daughter Giovanna Marie LaValle was born on 26th September 2014.

Snooki appeared on the front page of the March 2013 issue of Us Weekly, claiming to have lost 42 pounds post pregnancy.

In October 2016, Polizzi announced she had had a breast augmentation to obtain a C cup.

On 30th July 2010, Polizzi was arrested in Seaside Heights, New Jersey because of disturbing the peace, disorderly conduct, and criminal annoyance of others.

On 31st May 2011, in Florence, Italy, she was briefly taken into custody by local police after the car she was driving collided with a parked traffic police car.

The couple has a son named Lorenzo Dominic LaValle born on 26th August 2012.

Their daughter Giovanna Marie LaValle was born on 26th September 2014.