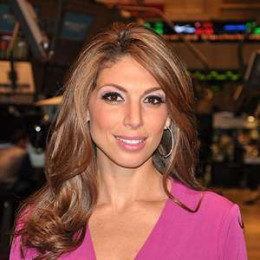 Nicole Petallides is an anchor for the Fox Business Network. The name of her parents is Fannie Holliday and John C. Petallides. Her parents are from Cyprus. She was Graduated from American University in 1993. She is the floor correspondent at the New York Stock Exchange. She is also famous for her beautiful long legs and her extra way of presenting. Her father is the owner of U.S. Amfax.

Nicole Petallides is a married woman. She got married to Nicholas Tsiolas, he is a Manhattan dentist. This couple got married in 1998, they love each other and there is no sign of divorce in their relationship. She is the mother of two sons. Her first son is 10 years old and the small one is 8 years old. There is no more information about her name of sons as well as her affairs in social sites. There are no rumors about her in social sites.

Nicole Petallides was born on 20 September 1971 in the U.S. to the family of John C. Petallides and Fannie Holliday. She belongs to Greek Ancestry.

Her father is the owner of U.S. Amfax. It is a New York company that works on telemarketing and promotions. Her mother is an immigrant from Cyprus. She is the founder and chief operating officer of a Greek language daily newspaper Proini.

Petallides completed her graduation from Buckley Country Day School in 1985 and later joined the American University.

Petallides started her professional career as an anchor at Bloomberg Television. She covered and reported the New York Stock Exchange for the shows including Bloomberg Market Update and Bloomberg Business Report.

Later, she worked as an assistant producer at CNBC. She contributed to Fox affiliate WNYW's morning show named Good Day New York, CNN, News 12 Lond Island, and NY1 News. Petallides and Jenna Lee were the first two anchors first working in the network since its launch in the Fox Business Network in 2007.

Petallides has a huge net worth and salary at present. Details about her fortune is still under review.

Nicole is a happily married woman and a mother-of-two. She tied the knot to her husband Nicholas Tsiolas on 9 May 1998. As per some reports, the couple first met via a mutual friend on a blind date. Tsiolas is a renowned dentist.

The couple has two sons whose details are maintained low profiled.

She got married to Nicholas Tsiolas, he is a Manhattan dentist.They are happy with each other.