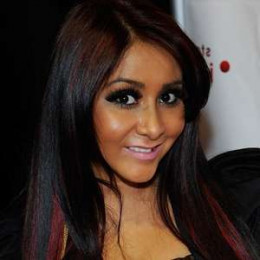 Nicole Polizzi is a Chilean-American reality television star and author who is known for her wild behavior and unique fashion sense. She gained media attention for being one of the reality stars of Jersey Shore and Dancing with the Stars. Indeed, Nicole Snooki was a breakout star on Jersey Shore.

Nicole is married to the former Jersey Shore star, Jionni LaValle. They turned a girlfriend-boyfriend relationship into holy matrimony after dating for four years.

Their ideal wedding ceremony was held on 29 November 2014 at St. Rose of Lima, a Catholic Church in East Vancouver, New Jersey. Before tying a knot, they shared vows in 2012.

To this date, Snooki is not heard of having extramarital affairs nor there are signs of their separation.  Nicole and her husband Jionni LaVelle shares three adorable kids.

How Rich Is Nicole Polizzi?

Nicole is the second richest starlet from the hit reality show. Jersey Shore earned her big bucks. Snooki generated somewhere around $2,200 per episode. Her salary was up to $150,000 per episode, according to Radar Online.

Polizzi bagged a bonus at the beginning and end of the season, that adds up to $2.55 million for the season.  Apart from that, she earned producing credits for the series "Snooki & JWoww" in 2012 and 2013.

Polizzi and her family currently reside in Marlboro, New York. Snooki bought a $2.6 million home in Florham Park, New Jersey in January 2015. This is indeed her second real estate in the area. She and her beau had a custom home built.

Nicole Polizzi remained on MTV in a spinoff show after the end of Jersey Shore. In September 2013, she began appearing as one of the contestants in the 17th season of Dancing with the Stars.

Some Interesting Facts of Nicole Polizzi

The couple married in a Great Gatsby-themed wedding ceremony in New Jersey. Jionni is also a Jersey Shore star.