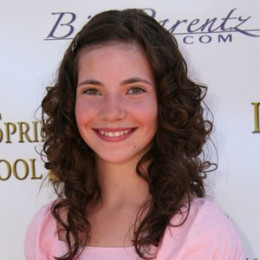 Nicole Smolen is an American actress, widely known for her appearance in the movie 'Criminal Minds'.

Nicole Smolen was born on 9th December 1996 in Lawrenceville, Georgia, U.S.A. During her time in school, she was outstanding in acting that her teachers were so impressed with her talent that they encouraged her to pursue her acting career.

She has an older brother named Justin Warren Downing, who is also an actor.

So, her school teacher began encouraging Smolen's parents to enroll her into dance theater, or acting classes. At her early age of 6, Nicole got a postcard from a local acting school in Bufford, GA, from where she began pursuing her acting career.

Later she moved to Los Angels, where she landed her first job with the Sundance Channel. Since then Smolen has been blessed to appear on various movies including, Out of Jimmy's Head, Criminal Minds, Jimmy Kimmel Live, and Brothers and Sisters.

Smolen has worked with various famous actors such as Sally Feilds, Kerris Dorsey, and Rachel Griffiths. Her two films '8 Days' and 'Citrus Springs' were critically acclaimed and was the most amazing experiences for her, according to Smolen herself.

Talking about her personal life, Nicole Smolen is currently single. Whether she is married or might be dating boyfriend, it is yet to be revealed, as she has maintained her personal life low profiled.

Nicole Smolen earns a decent amount of money from her acting career, as her current net worth is estimated to be $ 0.5 million.