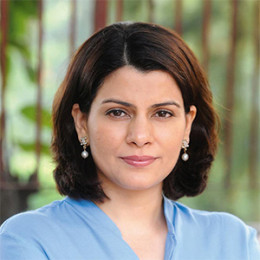 Nidhi Razdan is one of the most known faces of Indian news television and is considered the best news anchors ahead of Arnab Goswami and Barkha Dutt. She was born to mother Sarla Razdan and father Maharaj Krishan Razdan. Nidhi graduated from Lady Shri Ram College for Women and later pursued a Post-Graduate Diploma in Radio and TV Journalism at the Indian Institute of Mass Communication, Delhi. Nidhi is the primary anchor of NDTV 24x7 news show Left, Right & Centre. The program is normally broadcasted live from a New Delhi studio every evening where she covers debates and discussions on and beyond breaking news stories and headlines. Since the start of her career in 1999, Nidhi has covered a variety of news events and hosted a series of shows, often reporting live from the news scene.

Nidhi was previously married to Neelesh Misra after a long affair. But later, Omar Abdullah came in her contact and they began seeing each other. This led to her divorce with Neelesh. Nidhi has no children with Neelesh and is yet to marry Omar.

She has an attractive net worth and salary at present which is still under review.

Nidhi Razdan was born to the family of Maharaj Krishan Razdan. He is the former editor-in-chief of news agency, Press Trust of India.

She is the primary anchor of Left, Right & Centre on NDTV 24x7.

Nidhi Razdan won some important awards including Teacher's Achievement Award (TAA) for Communication, Ramnath GoenkaAward for Excellence in Journalism, and The Jammu and Kashmir State government award for excellence in journalism.

Nidhi Razdan was married to Neelesh Misra, an Indian journalist, author, and a radio storyteller. They got divorced after Nidhi got into an affair with Omar.