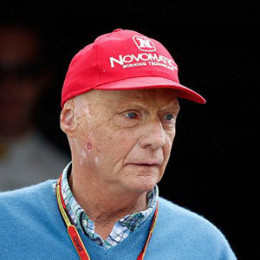 Andreas Nikolaus "Niki" Lauda (born 22 February 1949) is an Austrian former Formula One driver who was three times F1 World Champion, winning in 1975, 1977 and 1984. He was raised by a wealthy Austrian family who disapproved of his choice of racing as a career. He is currently the only driver to have been champion for both Ferrari and McLaren, the sport's two most successful constructors. He is also Bombardier Business Aircraft brand ambassador.

Niki was married to a model for around fifteen years. And was the father of two kids. After nineteen years of detachment from his earlier wife he was married to Birgit Wetzinger, who is 30 years his junior and was a flight attendant for his airline. She donated a kidney to Lauda when the kidney he received in a transplant from his brother, years earlier, failed.

He was married to Marlene in the year 1979 and together parented two children. Although he divorced with her, today she lives with him and mention that they are best friends.

He was secondly married to her and till today he is living a happy married life. Birgit donated one of her kidney to Niki when his kidney was damaged.

He is the first son and racing driver as his father.

He is the second child and also acts as Mathias's manager.