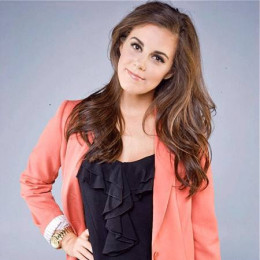 A sideline reporter for college football and also for various ESPN programming. She attended the University of Alabama and achieved Bachelor of Arts with a degree in broadcast journalism. She was also co-host of ESPNU Road Trip from 2011-2013 where she used to visit college football matches each week and report it. Before working for ESPN she was former reporter and on-field game host for the Atlanta Falcons. She has also starred as sideline reporter, studio host and features reporter for Georgia Public Broadcasting.

Exploring her personal life she is already married to love of her life. Together they seem very cute couple. Their marriage footage can be still found in official site of playerwags. Till now there has been no rumor regarding their conflict or extra marital affair with anyone which proves that both of them are loyal to each other. She has not been a biological mother.

He is professional footballer of the Pittsburgh Steelers. Their marriage held in presence of his team mates and family. Couple has n't given birth to any children yet.