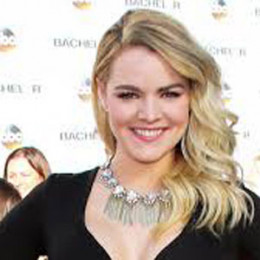 American reality star, Nikki Ferrell is the winner of the 18th season of ABC's hit romantic reality series, The Bachelor. The Children's Mercy nurse rose to massive popularity after she won the competition. Ferrell is married to her longtime boyfriend, Tyler Vanloo, a sales executive. The duo were best friends from their past days.

Nikki Ferrell was born on October 29, 1986, in Kearney, Missouri. She is the daughter born to Jen Ferrell and Tom Ferrell. Nationality-wise, she is American and belongs to the White-American ethnicity. She has two brothers; Alex Ferrell and Eric Ferrell.

Nikki Ferrell earned popularity after participating in the show, The Bachelor season 18. She was working as a pediatric nurse at The Children's Mercy Hospital at Kansas City. Also, she was a model when she appeared in the show.

Ferrell was selected as one of the 27 contestants participating in the show, The Bachelor in December 2013. The season was featured by a former Venezuelan professional soccer player, Juan Pablo Galavis.

Ferrell made a victory over Clare Crawley in the finale of the show. She won season 18 of “The Bachelor” on March 10, 2014. She was declared a winner after winning the final red rose from bachelor Juan Pablo Galavis, who was roundly disdained by fans of the show.

After the show, Ferrell and Galavis participate in the 5th installment of VH1 reality series, Couples Therapy. The series first sired in VH1 on September

The former Bachelorette winner, Nikki Ferrell is married to his longtime boyfriend, Tyler VanLoo. The pair tied the knot on October 8, 2016. The duo tied the knot at St. John’s United Methodist Church in Kansas City, Missouri. Later, guests partied at the Grand Ballroom of the Kansas City Convention Center.

According to her Instagram, the wedding ceremony was planned by Madison Sanders Events and was photographed by Alea Lovely. Her fellow bachelors co-contestants Kelly Travis, Christy Hansen, and Andi Dorfman were among the guests.

Ferrell has been in a relationship from the past. According to her Instagram, they were friends before their relationship turned romantic. She also cited Tyler as her best friend whom she can't wait to marry, on Instagram.

The pair got engaged in January 2016. Tyler proposed her while they were vacationing in Pagosa Springs, Colo.

Previously, Ferrell was in a relationship with The Bachelor star, Juan Pablo Galavis in March 2014. The duo dated for seven months. They broke up in October 2014.  Ferrell revealed the reason behind their split was their personal differences.

"I knew I was never going to be the number one priority. He has a daughter but there's a difference between being the second priority and the seventh priority."

"I think at that point I had just come to the conclusion that we were different people. I just knew that my lifestyle was never going to fit in with his."

According to her ABC profile, Ferrell has 4 tattoos on her body and she has a black dog of poodle breed whom she named Zoey.

Nikki Ferrell's Net Worth And Height

Ferrell is the winner of the 18th season of The Bachelor. She made a considerable amount of money from the show, as The Bachelor and Bachelorette stars are paid around $100,000.

Nikki Ferrell is happily married to his longtime boyfriend, Tyler VanLoo on October 8, 2016. The duo exchanged a vow in a private ceremony in Kansas City, Missouri.