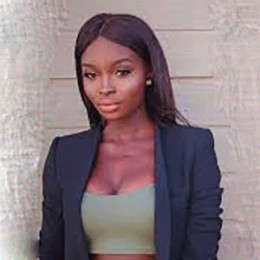 Nikki Perkins is a daily blogger and social media personality. She has also worked as a model before pursuing her YouTube career. She is known for making videos with her husband, Jamie Perkins. She also makes lifestyle, beauty, and makeup videos on her channel.

Nikki was born on April 2, 1990, in Khartoum, Sudan and was moved to Egypt when she was a baby and then moved to Australia. Nikki was raised with her two older siblings Paula and Guy, two younger brother and two younger sisters named Sarah and Duckie.

She created a personal YouTube channel in January 2015 and quickly racked up 65,000 subscribers in seven months.

She started her career as a model. She started her YouTube career on Jan 31, 2015. She posted her first YouTube video titled 9 Week Pregnancy Update + Bump Shot on August 4, 2015, which received thousands of views. Most of her videos are about making lifestyle and fashion videos.

Nikki Perkins' Net Worth And Salary

Nikki Perkins’ net worth is expected to be close to millions at present. She has been running her self-titled YouTube channel for over three years and has added a good sum of salary from her YouTube career.

She is active on Instagram and Twitter with thousands of followers. She shares her recent updates and activities on her social accounts.

Nikki is married to her boyfriend and her partner Jamie Perkins who is also a blogger and musician. For their first date, this couple went to watch the movie ‘The Mummy Return’. Jamie proposed to Nikki on April 26, 2012, on Melbourne’s Biggest outdoor screen at Federation Square and they got married on March 21, 2013.

Ava’s Ballet themed party was TuTu cute! . . . Thank you Fifi at @luxecoutureevents for pulling this off! You are next level and it all turned out amazing Ava’s birthday vlog won’t be up until next week but here are some pics in the meantime! Styling & Props @luxecoutureevents Balloons @boutiqueballoons.melbourne Florals @samrizzofloraldesigner Photography @zbyzahrah Cake and desserts @pastelandbloom Strawberry tower and cakepops @chocolateno5_ Grazing Table @iamboard_melbourne Decals | signage | stickers | cake toppers @janeandcocrafts Favours @luxecoutureevents Cake @nikoscakes Chairs and Tables @sophia_and_co._party_hire Children’s play equipment @littlepartyplay

She has posted the videos of their wedding proposal and actual footage of their marriage ceremony, which became the most popular videos on her channel.

She announced her pregnancy on July 4, 2015, and gave birth to their cute daughter Ava Sarah on January 24, 2016. Nikki has her own personal channel for pregnancy, hauls, beauty and motherhood.

Perkins gave birth to her daughter named Zoe in March 2018.

Jamie Perkins is an Australian musician and blogger of YouTube along with his wife Nikki Perkins. He proposed his fiancé Nikki on Melbourne’s biggest outdoor screen at Federation Square. They welcomed their daughter Ava Sarah in 2016.

Ava Sarah is the first child of daily blogger Nikki and Jamie. Nikki announced her pregnancy through their blog on 2015 and was born in 2016.