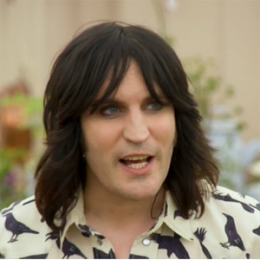 Noel Fielding is a well-known English comedian and actor who is popularly recognized for her character as Vince Noir on The Mighty Boosh. He successfully established himself as a DJ and musician too. In 2012, his solo comedy sketch show, Noel Fielding's Luxury Comedy premiered on the U.K.'s channel E4 which was a huge success.

Noel Fielding was born on May 21, 1973, in Westminster, London, England. He is the son of Dianne Fielding and Ray Fielding. He is English by nationality and belongs to White ethnicity. He grew up along with his brother, Michael Fielding, now a comedian as well, in Pollards Hill, South London.

Fielding began his professional career in the late 1990s as a stand-up comedian. In 2010, he participated in the  Channel 4's Comedy Gala which was filmed live at the O2 Arena in London. He is recognized for portraying the character of Vince Noir, a childlike eccentric in the cult comedy series The Mighty Boosh.

The show has won the Shockwaves NME Best TV Award consecutively for three times. He worked on many off-beat comedy programmes, including Nathan Barley, The IT Crowd, AD/BC: A Rock Opera. In 1998, he appeared in the sketch show Unnatural Acts.

In 2010, he played the role of "Marcus" in the series 3 of How Not to Live Your Life. He also worked on Radio too, in 2007, he appeared on The Russell Brand Show on BBC Radio 2. In early 2008 he had his first exhibition, Psychedelic Dreams of the Jelly Fox. In March 2015, his exhibition 'He Wore Dreams Around Unkind Faces' was held at the Royal Albert Hall.

Noel Fielding, 44, is in a live-in relationship with his longtime girlfriend, Lliana Bird. She is a Radio X DJ and presenter who hosts the Sunday evening show on the station.

The duo is going strong since 2010 and share a good bond with one another. As per the report, the couple has a blissful life, and they haven't made any plans about their marriage yet.

Priorly, he was romantically involved with singer and guitarist, Dee Plume. The duo was first spotted in the late 1990s, their relationship lasted for almost 19 years before breaking up in 2009.

The multitalented personality, Noel Fielding has an estimated net worth of $6 million, as per some online sources. He earned a huge sum from his shows and exhibitions. He is even regarded as one of the richest British comedians.