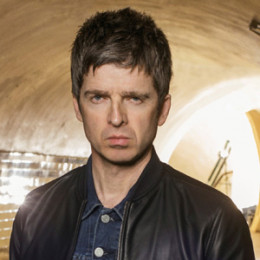 Noel Gallagher, the multi-talented personality is known for his contribution in music fraternity. He is a popular English musician, singer, songwriter, and guitarist. Noel along with his brother, Liam Gallagher formed a band, The Rain which was later changed into Oasis. He served as songwriter, lead guitarist, and vocalist for the band. Gallagher is happily married to Sara MacDonald. The duo exchanged vows on 2011 at an intimate ceremony. They are the proud parents of two sons.

Noel Gallagher was born as Noel Thomas David Gallagher on May 29, 1967, in Manchester, England. He was bought up in an Irish Catholic family to Peggy and Thomas Gallagher. He has two brothers;  Paul Gallagher and Liam Gallagher, Liam is the founder of Oasis band.

Soon after the birth of Liam, Noel along with his family shifted to Ashburn Avenue in the Manchester suburb of Burnage. He experienced a miserable childhood because of his abusive father who used to beat him and his brothers after consuming alcohol.

In 1976, his mother, Peggy separated from her husband and took her three sons with her. During that period, Gallagher learned guitar which later inspired him to pursue his career in music line.

Gallagher started his career in 1988 as a roadie for an indie band Inspiral Carpets. In 1991, his brother, Liam offered him to join the local band called The Rain as a manager, but he refused the offer and demanded to be creative control and sole songwriter of the band.

Later, Liam Gallagher changed the band's name to Oasis. In 1994, the band released their first single, Supersonic which peaked at no.31 on the official UK Charts and the same year they launched their first debut album entitled,  Definitely Maybe. The album was a huge success.

The band was known for their "rock and roll lifestyle". They had given many superhits songs as a prominent force in the Britpop movement. In 2007, Oasis won the Brit Award for Outstanding Contribution.

In 2009, Gallagher split from Oasis due to some issue with his brother and begun his career as a solo artist. He released a self-titled album, Noel Gallagher's High Flying Birds in 2011. As a solo artist also he earned success.

Noel Gallagher, 50 is a married man, he tied the knot with his long-time girlfriend, Sara MacDonald on June 18, 2011. Their private ceremony was held at the Lime Wood Hotel in the New Forest National Park. His best friend, Russell Brand served as the best man at his wedding.

Noel and Sara are together since a long time and happy with their married life as result there are no rumors regarding their split or divorce.

Previously he married Meg Mathews in Las Vegas. The former couple first met in 1994 through her roommate. He has a daughter, Anaïs Gallagher with her. After four years living as husband and wife, they ended their relationship in divorce.

Gallagher was in a romantic relationship with his then-girlfriend, Diane with whom he never married but he always considered her as one of the special people of his life.

Noel Gallagher grabbed success from his musical career and so far has an estimated net worth of £46 million pounds.As a member of Oasis, the band earned over 70 million records from a worldwide collection.

Meg Matthews is the first wife of Noel Gallagher. The duo first met in 1994 and shared a daughter.

Sara MacDonald and Noel Gallagher first met on June 2000 in Ibiza. Since then they are together and have two sons.

Anais Gallagher is the first child of Noel Gallagher and she is as beautiful as her mother is. She was born on 27 January 2000.

Donovan Rory is the first son of Noel Gallagher and Sara MacDonald. He was born on 22 September 2007.

Sonny Patrick is the youngest child of Noel Gallagher. He was born after three years of Donovan on October 1, 2010.