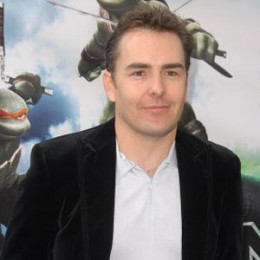 American actor, Nolan North majored in journalism at the University of North Carolina at Chapel Hill. His popular film credits include Lego DC Comics Super Heroes: Justice League: Attack of the Legion of Doom, Batman: The Killing Joke and Justice League: Crisis on Two Earths. North is well known for his animation roles such as Cyclops in Wolverine and the X-Men, and Snow Job.

Nolan North has been married to Jill Murray, an actress, and producer (known for Port Charles) since 4th June 1999. The couple has two children. Nolan is best known for his remarkable work on Uncharted: The Nathan Drake Collection (2015), Con Man (2015) and Pretty Little Liars (2010). Recently he replaced Peter Dinklage as the voice of the Ghost in Destiny: The Taken King.

Nolan Ramsey North is popularly known as ‘Nolan North’ (born on October 31, 1970). He belongs to the white ethnicity and holds American nationality. His voice on ‘Uncharted’ series as ‘Nathan Drake’ gave him the new height of popularity.

Nolan completed his education in journalism from ‘University of North Carolina’ with a baseball scholarship. He attended ‘Emerson College’ too for graduation.

North started his career as a reporter in ‘New Jersey’ for almost one year. After that, he visited New York where he got a chance to be a stand-up comedian. Later he was cast in ‘Port Charles’ series which was aired on TV from 1997 to 2003.

In 2007, he has worked with motion capture for ‘Uncharted’ video game where he portrays the character of ‘Nathan Drake’. He played the character up to season 4 (2016). He has been nominated for twice in the category of “Best at the Performance by Human Male” in ‘Spike Video Game Awards’.

His notable performance in every movie, TV shows and video games were outstanding and some of them are; ‘Prince of Persia’, ‘Final Fantasy XII’, ‘Lord of the rings’, ‘Star Trek’, ‘Wolverine and the X-Men’ and much more.

The 46-year-old handsome artist exchanged vows with his fellow actress (Jill Murray) of ‘Port Charles’ on 4th June 1999. The couple has been blessed with two beautiful children. They are enjoying their 16 years of long and blissful married life with their kids.

North has total $2 million dollar net worth including his expensive cars and gadgets.

Nolan North has been married to Jill Murray, an actress, and producer, known for 'Port Charles' since 4th June 1999.