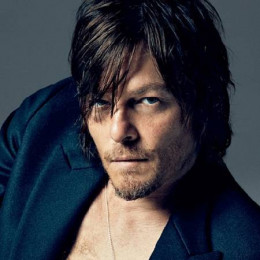 Norman Mark Reedus is an American actor, director and model best known for his role on horror drama TV series "The Walking Dead" as Daryl Dixon. He is the son of Norman Reedus and Marianne, a teacher. For his work as Daryl Dixon, he received a nomination for 2012 Saturn Award for Best Supporting Actor. He entered into film industry from the movie Mimic in 1997. He is known for his Prada clothing modeling in 1990s.

Talking about his personal life, he hasn't been married yet. As he is a handsome and popular guy, lots of girls are crazy about him. He has dated a long list of gorgeous ladies and with one of them he has a young son. There were lots of rumors going on about his sexuality of being a gay but he has stated all those things as hoaxes and mentioned himself as straight. He hasn't faced any controversy yet.

Though the couples broke up, they still are good friends and has shared joint custody of their son. His pictures can be found on the Internet easily.