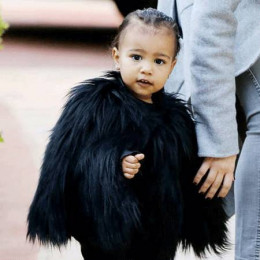 She is the beautiful and gorgeous baby daughter of Kim Kardashian and Kanye West. She is just two years old but she has already debuted by posing in Vogue magazine. Professionally her mother Kim Kardashian, is a famous reality TV star, and her father Kanye West is a singer, rapper. Though her parents announced that she was going to born due at the end of 2012 she was born in 2013. When she was born her parents were only engaged but not married. It is said that she will be raised by her grand mother Kris Jenner.

Talking about her personal life It's obvious that she is too small to be in relationship. She is so small but she has already been to party at the house of Caitlyn Jenner during the 4th of July. Her parents seems to adore her very much. Her mother has uploaded many pictures of her in her official Instagram page. She was baptized in old City in Jerusalem.