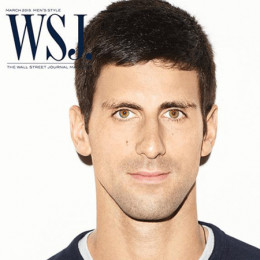 A Serbian professional tennis player who has already achieved his first #1 world ranking in 2011 and has also won his first major tournament at the 2008 Australian Open. He is a son to Srdan and Dijana Djokovic. He has two younger brothers named Marko and Dude who is also a professional tennis player. He started to play tennis when he was just 4 years old. When he was just six years old he was discovered by Yugoslavian great tennis player Jelena Gencic. In 2011 he became the sixth male tennis player to win 3 major tennis tournaments in one year and he won three Grand Slam titles. In 2014 Wimbledon tournament, he became the 21st player in tennis history to earn 7 majors titles.

He is already tied a knot with his girlfriend. She is very beautiful and gorgeous. Together they are parents of one son. Since he is so popular player it's obvious for girls to fall for him and after marriage to he has involved himself in some extra-marital affair but in spite of that, there has been no report of any conflict or divorce from his wife by which we can assume she really loves him very much.

Professional tennis player Novak Djokovic was born on May 22, 1987, in Belgrade, SR Serbia, Yugoslavia. His father Srdan is originally Montenegrin and mother Dijana is Croatian. So, he considers himself as Serbian.

His both younger brothers;  Marko and Djordje are also tennis players with professional aspirations. He fluently speaks Serbian, English, French, German, and Italian.

Djokovic was coached by former Slovak tennis player Marián Vajda from 2006 until 2013 Boris Becker took over the role of head coach. He started playing tennis since the age of four. In 1993, he was spotted by Serbian tennis player and coach Jelena Gencic and she coached him till 1999.

He made his international debut in 2001 and won the European championship’s singles and doubles titles. His career in juniors was partly impressive with win-loss records.

Since 2003, he started playing professionally. He initially played in ‘ATP Challenger Series’ and ‘Futures’ tournaments and successively wins for three times.

He made his first Grand Slam appearance in 2005 and won the title in 2008 with the  ‘Australian Open’. He also succeeds to won his first ‘Tennis Masters Cup’ title that year.

In 2005, he involved into the world of business when his family founded the 'Family Sport'. In 2009 the company bought one of  ‘ATP’ tournaments, the ‘Dutch Open’ and brought it to Serbia. He was one of the top 20 players of 2006.

He won his first ‘Master Series’ in 2007. The Same year he was named best athlete of Serbia by ‘Olympic Committee of Serbia’ and also received the ‘Golden Badge’.

On July 4, 2011, he became the World No. 1 tennis player and created a new record of winning maximum single season prize money, $12 million, on the ‘ATP World Tour’.

Novak Djokovic married his high school sweetheart on July 10, 2014, in Sveti Stefan, Montenegro. Later their church wedding which was held in the same place after two days (12 July 2014) in the Church of Saint Stephen.

The duo dated one another for almost eight years before tying a knot. They used to tell, they were a best of a friend before husband and wife.

The couple shared one son, Stefan (born on October 2014) and recently in April 2017, Novak announced they are expecting their second child.

the 30-years-old tennis player is one of the richest and highest paid players in the world with a total net worth of $160 million. His consecutive wins and outstanding performance not only increased his fan following but also increased his total amount.

She is very pretty and gorgeous. She has given birth to one son. Her picture along with him can be found in Their social media profile.

He is very gorgeous. He is the only son of the family.