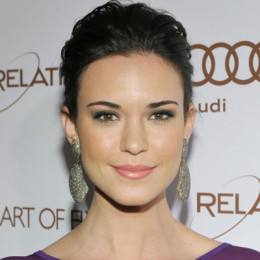 She is an American actress who is known for her performance in the series Life on Mars , New Girl, Two and a Half Men,etc. She had made her debut in acting when she was around 14 in the year 1990, from the movie Kindergarten Cop as Rosa. She has been active in the industry afterwards. She was born to a Cuban mother, Lydia Nodarse and an Italian and French descent father Victor Yustman. This means she has mixed ancestry. She had attended Woodcrest Christian High School.

She is a married woman. She has no children till date. She is living happily with her husband and are planning to have a child. However, there are rumors that she is pregnant and is divorced but seems to be false as the couple are sighted together and no baby bump is seen. Prior to her marriage, she had dated few men for long and short period of time. She does not like to talk about her personal life in order to avoid rumors and gossips on her personal life.

The two were in affair for a year before they were engaged. Later, they married the same year of their engagement. They are living very happily and have no any children yet.