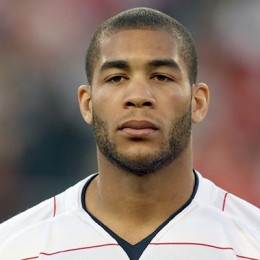 An American professional footballer, Oguchi Onyewu, is currently playing in the club Charlton Athletic F.C. since 2014 and in the American National Soccer Team since 2004 as the center back wearing t-shirt number 15. He had started his youth career in 1999 from the club IMG Soccer Academy later moving to Clemson Tigers in 2000. He had started his professional debut in 2002 from the club Metz. Prior to inducted in Senior national team, he had played in under 17 and 20 national football team.

He is a married man. He is married to his longtime girlfriend Salome Khorasanchi whom he loves very much. There is no any information on his children if any. He has not been pulled in any women related rumors or scandals.

He loves his privacy and keeps his personal life out of professional. He is rumored during the transfer season on his transfer. He was pulled in the racism controversies where he had been the victim of racism.

Oguchialu Chijioke Onyewu was born on 13 May 1982 in Washington, D.C.

He is the retired soccer player who is currently playing for Orlando City B in USL League One. He stands at a height of 6.33 feet (1.93m). He is the second-tallest outfielder player in the U.S. team history.

He opened a gym in Richmond, Virginia in early 2018.

Not much information is available on her. She seems to be from his hometown. They are happily married. There is no any information if they have any child.