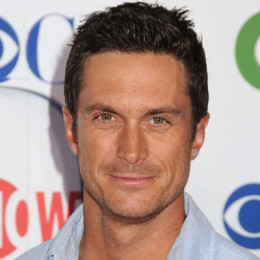 A talented American actor who is best known for his role in the CBS TV series Rules Of Engagement in which he played as Adam Rhodes.

American actor Oliver Hudson was born on September 7, 1976, as Oliver Rutledge Hudson to Goldie Hawn and musician Bill Hudson. Though he was born in Los Angeles, California he was raised in Colorado along with his sister, actress Kate Hudson after his parent's divorce.

Oliver is of Italian, Hungarian and Jewish ancestry and raised in the Jewish faith.

Hudson has a secretive personality and that might be the reason he never spells a bean about his educational background. However, it was believed he attended the University of Southern California and earned a Bachelor’s degree in Theatre and Arts.

Oliver began his acting career in 1999 opposite his mother in the comedy film The Out-of-Towners and later he appeared in several teen movies like; The Smokers and Going Greek.

In 2002, he got his first lead role in The WB comedy series My Guide to Becoming a Rock Star. Subsequently, he cast opposite to Katie Holmes in the sixteen episodes of Dawson's Creek from 2002 to 2003.

Hudson worked in numerous movies which prove him one of the versatile actors of Hollywood such as; The Mountain, The Breed, Black Christmas, Rules of Engagement, Nashville, Scream Queens.

In 2015, Oliver along with his sister launched FL2, a men's activewear line and a subsidiary of Fabletics.

Hudson is a married man, he exchanged a vow with Erinn Bartlett on June 9, 2006, on Cabo San Lucas, Mexico. The ceremony was officiated by a Buddhist monk.

The duo was living a blissful married life for 11 years and there aren't any rumors of their divorce and extra-marital affairs.

The 40 years old Oliver has a glorious net worth just like his glorious career of $10 million. His source of income is his acting among movies and his outside businesses.

After dating one year they got engaged and after two years of engagement they got married. She is mother of three children. Couple's pictures can be found in internet.

He is elder son of the couple. His picture along with his father can be found in different sites.

He is named after Buddhist custom since the couple are greatly influenced by Buddhist religion.

She is very cute and adorable daughter of the family. Her picture along with her mother can be found in different sites.