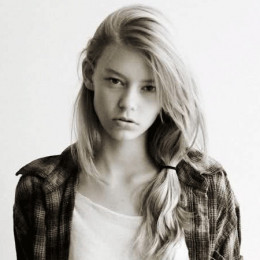 An American runway model who was discovered in a showcase in North Carolina in 2009. She has been runway model for Sachin + Babi, Sophie Theallet, Marc Jacobs (as an axclusive), Doo.ri and Honor. She has already done campaign work for Prada. She has been featured in popular magazines like V, Dazed & Confused, Numéro Tokyo, Elle Girl Korea, Sunday Telegraph, Interview, Russh and Vogue Girl. Currently she is signed with Ford Models, Elite Models and Milan and View Management in Barcelona.

Once she was involved in controversy after she was said to be underage to be involved in modelling because she was only 15 years old while she was in 2011 Prada campaign. Talking about her relationship status she has not married yet. Since she has not revealed any information regarding her boyfriend for now we can assume she is single. Young and hot model is currently busy in pursuing her career rather than passing time with her boyfriend.