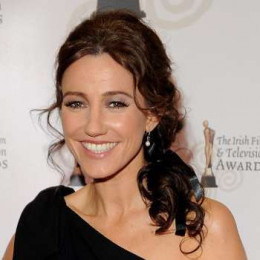 Orla Brady is an Irish actress. Her father is Patrick and mother is Catherine. She is the second child of her parents. She had attended Loreto Convent and Ursuline Convent, a Catholic Church. Her career had begun with Ballonatics Theatre Company, a touring productions of Hamlet and Finnegans Wake. She has worked in movies like A Love Divided, Silent Grace, Last Night etc. She had also worked in various television series named Minder, The Bill, Out of the blue etc. She had also posed for a series of photographic figure studies in late 1980, which was published in The Illustrator’s Figure Reference Manual.

She is a married woman. She got married to an English photographer. She got married in 2002. Even though it has been almost fourteen years of marriage still the couple is so much in love with each other. The couple has no child yet. Other than her marriage there is no any other confirmation or information about her having any affair or any relationships.

She has married to an English photographer named Nicholas Brandt. She has no child yet. She has met Nicholas in Los Angeles where she moved in 2001.