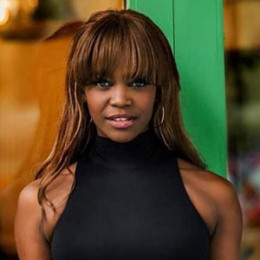 Born and raised in Pretoria, South Africa, Otlile Mabuse is a professional Latin American ballroom dancer. She is best known for her appearance in British TV series, Strictly Come Dancing and German version of Let's Dance. She is married to Marius Lepure since 2012.

Oti Mabuse was born on August 8, 1990, in Pretoria, South Africa under the birth sign Leo. She holds South-African nationality and belongs to Black ethnicity.

Mabuse studied civil engineering at the Tshwane University of Technology before pursuing her career in professional ballroom dancing. She was raised along with her elder sister, Motsi Mabuse.

Oti Mabuse started her career as a ballroom dancer. She won the  South African Latin American Championship eight times. Then she moved to Germany to enhance her dancing horizons.

In 2014, she placed third in "World Cup Freestyle Latin."The same year, she ranked #2 in "European Championship Latin" and eventually went on to win the title of "German Championship PD Freestyle Latin." In 2015, Mabuse participated in the eighth season of the German version of Let's Dance. She partnered with singer Daniel Küblböck, and the duo ended the show in the sixth position.

Mabuse also competed in the 13th season of Strictly Come Dancing in 2015. She paired up with Olympic boxer Anthony Ogogo; they ended the show in the 14th place. That year, she featured in the "Children in Need" and "Christmas" specials of the show, in which she partnered with actors Jack Ashton and Tom Chambers respectively.

In 2016, Mabuse returned to Strictly Come Dancing season 14 and this time she partnered with former Hollyoaks actor Danny Mac. They reached to finals and finished as runner-ups. In season 15, she paired up with Jonnie Peacock, Paralympic sprinter and they were eliminated in Week 9. The same year, she also made her comeback in Let's Dance for its ninth season where she teamed up with TV presenter Niels Ruf. The couple was eliminated in week 2, securing 14th place.

In 2017, Oti Mabuse participated in the national Strictly Come Dancing - The Live Tour along with her celebrity partner, Danny Mac. The duo was voted the winners of more individual shows than any other couple. The same year of August she along with Ian Waite announced a 60 date 2018 UK Tour "An Audience With." Mabuse also participated in an episode of Tipping Point: Lucky Stars in 2017.

According to a few reputable online sources, Oti Mabuse’s estimated net worth is in six-digit-figure, but, the exact amount is still not public. She earned several titles in the field of dancing including first place in German Championship PD Freestyle Latin and second place in European Championship Latin.

As per some sources, every dance professional taking part in Strictly Come Dancing gets paid around £30,000 per series. Since Mabuse has appeared thrice in the series, she earned estimated £90,000.

Mabuse also accumulated a significant amount of money from others reality series, including Let's Dance and Tipping Point: Lucky Stars.

Oti Mabuse married her longtime boyfriend, Marius Lepure. The duo exchanged vows in November 2012 at an intimate ceremony. Her husband is a professional dancer and appeared in the Strictly Come Dancing in 2017.

The couple has no children. The duo is together for a long time and to date share a healthy relationship. She is an active social media user and often posts her pictures with her husband.

Below, we present you a video of Mabuse and her former Strictly Come Dancing partner Jonnie Peacock attending an interview.

Marius Iepure is a professional dancer. He married Oti Mabuse in 2012 at an intimate ceremony in the presence of their closed ones.