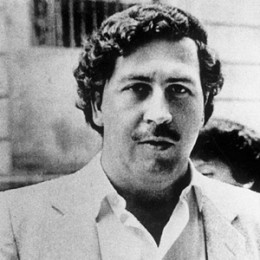 Pablo Escobar was a Columbian drug lord popularly recognized as "World's Greatest Outlaws." He was often referred as The King of Cocaine and the hardest smuggler to catch. He was the most dreadful, influential and wealthiest criminal in the history of the world. Pablo formed the Medellin Cartel along with other criminals to ship cocaine to the American market. As per the Forbes Magazine 1989, he was the seventh richest man in the world with a total net worth of US $25 billion. He was married to Maria Victoria and had two children; Juan Pablo and Manuela.

Pablo Escobar was born as Pablo Emilio Escobar Gaviria on December 1, 1949, in  Rionegro in Antioquia, Colombia. He was the third son of Abel de Jesus Escobar, a farmer, and Hemilda Gaviria, an elementary school teacher.

He was raised in a poor family with his six siblings and lived in an adobe hut. He joined the local university and studied political science but due to the financial crisis, he had to stop his education. Later he joined the University of Antioquia for a short period.

He started selling illegal cigarettes, fake lottery tickets and also robbed banks. In his 20's he was recognized as a famous car thief and bodyguard who kidnapped the Medellin executive and made $100,000. Escobar wanted to be the millionaire so, he worked for the most dangerous smuggler of that time.

Roberto Escobar's ( Pablo's brother) book, The Accountant's Story explained the success story of Pablo how he rose to fame from poverty and became the richest billionaires in the world. In 1970's Escobar formed the Medellin Cartel in collaboration with other criminals which was the most successful criminal enterprise in the world history.

Medellin used to ship cocaine to the American market. At that time, they supplied 15 tons of cocaine per day and enjoyed a monopoly in the cocaine smuggling business in the U.S. As per Roberto, they spent monthly $2,500 just for buying rubber bands for wrapping the stacks of cash.

Escobar had so much illegal money which he had to store in his warehouses, and every year, about 10% of the amount was damaged because of the rats.

He entered into the drug business in 1975 after Medellin drug trafficker Fabio Restrepo was murdered. He used to fly plan by himself between Colombia and Panama for smuggling the drug to the U.S.

The same year he was arrested by the Columbian police while returning from the Medellin from Ecuador with a heavy load. He failed to bribe the judges so, he killed the two arresting officers to escape out. Later, he started to either bribe or kill to deal with the authorities.

At first, he used to smuggle cocaine in old tires of planes but later when its demand got high in the U.S., he arranged for additional shipments and alternative routes and networks including California and South Florida. The pilot would receive $500,000 per flight depending on the amount of cocaine.

In collaboration with Carlos Lehder, he developed a new drug center named Norman’s Clay in the Bahamas as the new island trans-shipment point. Between 1978 and 1982, this location remained the primary route of smuggling for the Medellin Cartel.

Pablo Escobar wanted to become the president of Colombia after he started earning as he saw it, the best way to earn wealth and legitimacy lay in crime.

His desire for politics and power of money made him an alternate member of Colombia’s Congress in 1982. But his past illegal records forced him to resign the position after two years of the election. The justice minister who had revealed Escobar's notorious background was later slain.

In June 1991, Escobar surrendered to the Colombian government but in return, he asked his own luxury private prison called “La Catedral” which was guarded by men he handpicked from among his employees.

However, he continued his criminal activities from jail and in 1992, it was announced that he was going to shift in another prison, but he succeeded to escape. The same year, United States formed a group of special Colombian police task force named  Search Bloc to hunt down Escobar.

Escobar has many enemies around the world, and his rivals formed another group, Los Pepes who killed more than 300 of Escobar's associates and destroyed his cartel's property.

Pablo Escober married Maria Victoria in March 1976. During their marriage, Escobar was 26, and his wife was just 15 years old. Their relationship wasn't agreed upon by Maria's family as they knew about his bad reputation but the couple got married anyway.

They had two children; a son, Juan Pablo (now Sebastián Marroquín) and a daughter, Manuela. Today his children have established themselves as a better person. His son, Juan is a motivational speaker and a student of architecture.

In 2015, Marroquin published a book, Pablo Escobar: My Father, which explained the story of his experience with Pablo and he also mentioned his father's death as a suicide.

Once in an interview with France-Presse interview, he said,

“He showed us the path we must never take as a society because it's the path to self-destruction, the loss of values and a place where life ceases to have importance.”

Pablo Escobar's life was filled with struggle after he escaped from La Catedral, he was the target of the American and Columbian government. After 16 months of his escape, he was shot by Colombian National Police on  December 2, 1993, in a middle-class neighborhood in Medellin.

The cops used radio triangulation technology to find him which was provided by US government to Colombian electronic surveillance team. A firefight ensued and, as Escobar tried to escape by running across a series of rooftops, he and his bodyguard were shot and killed.

Still, there is a mystery regarding his death because his family members called it a suicide but Colombian government took their responsibility in this matter.

Though today he is not alive, he remained as a subject of several books and based on his life several movies and series have been made.

Escobar was one of the wealthiest smugglers of all time. In the early 1990s, he had the net worth of US $30 billion (equivalent to about $55 billion as of 2016) which made him world's richest man of that period.

He had a weekly income of $420 million. Additionally, he owned numerous luxurious properties and automobiles. His house contained a colonial house, a sculpture park, and a complete zoo with animals. He also owned a massive Caribbean getaway on Isla Grand.

Escobar used to earn $100,000 by kidnapping and holding a Medellín executive for ransom in early's 1970. He had a dream of earning COL $1 million by the time he was 22, so he started working for Alvaro Prieto, a contraband smuggler.

In 1989, Forbes magazine estimated Escobar to be one of 227 billionaires in the world with a total personal net worth of US $3 billion. In 1997, he is known for his bank deposits as he saves more than COL $100 million (almost equal to the US $3 million).

The Medellín Cartel supplied 80% of the cocaine in the US which made him a billionaire in short period with the US $21.9 billion a year as personal income. Additionally, Cartel brought more than $70 million per day which was roughly estimated $26 billion per year.

Maria Victoria Henao is best known as the wife of Pablo. She married him at the age of 15 despite her family being against their relationship.

Juan is a motivational speaker known as Sebastian Marroquin is the only son of Pablo. He published a book in 2015 named Pablo Escobar: My Father.

Manuela is the youngest child of Pablo and Maria. She prefers to keep her personal life low-key.