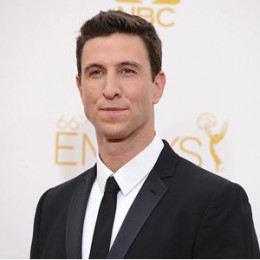 Emmy award nominated Canadian actor, Pablo Schreiber is known for his dramatic stage work and for his portrayal of Nick Sobotka on The Wire and for his role of George on Orange Is the New Black. His first appearance was in a movie called Bubble Boy in 2001 as Todd. His father, Tell Carroll Schreiber, was an actor and mother, Lorraine Reaveley, is a Canadian body-based psychotherapist. He graduated in 2000 with a degree in Theatre from Carnegie Mellon University in Pittsburgh, Pennsylvania.

Pablo has shared very limited information about his personal career. The name of his spouse whom he got married after his affair is Jessica Monty and somewhere the rumor is they are still together. Therefore there is no any exact and adequate information about their reliability of their relationship. There is no any information about their children as well as much of his information is related with his career but not to his personal bio. Pablo has not indicated any affair by now and he has also not been seen with his spouse therefore there is a big question behind the relationship status of this couple.

He was married to his wife Jessica in the year 2007. There are rumors that they have now separated. However no any official news has been obtained about this things.