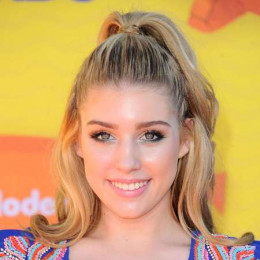 An American actress and singer who is better recognized for starring on the Nickelodeon series Every Witch Way as Maddie Van Pelt. In Houston she got trained as competitive cheerleader in addition to ballet, jazz, tap and other dances. She was just 5 years old when she made her first debut in commercials. She was only eleven years old when she co-starred with Chris Evans in the film Puncture. She has also made guest appearance in other shows like R.A.D.I.C.A.L.S, Totally, The Bedtime Story and so on. She was awarded with Young Artist Award 2013 for her outstanding acting.

Since she is still too young to get married there is no question of having marital relationship with anyone. And about her dating life she has not dated anyone till now. It seems like she has given more priority to her studies and acting career than her love life. She is avid user of twitter and frequently shares her photo and thoughts through twitter , so her fan can follow her in her official twitter account @parisstweets to get more updates on her.