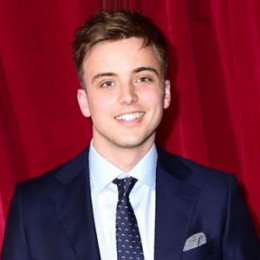 Parry Glasspool, one of the nominees of Best Newcomer in the National Television Awards in 2016, is known for his role Harry Thompson in the Channel 4 soap Hollyoaks. Glasspool was suspended from the show for two weeks and even paid an indefinite sum of money due to the video he posted on Instagram in August 2016.

Parry Glasspool was born on 5th March 1992 to a Welsh mother and English father. He was born in Redditch near Birmingham.

He attended BA (Hons) Acting for Stage and Media at University of South West London in 2013. Further, Parry did A Level: Theatre Studies in 2010 from Stratford College.

Glasspool appeared in two short films including 'How To Be Sexy' by Isabelle Sieb and 'Cicada by Delouris Collins.

He featured in the main series of 'Hollyoaks,' with his first episode being broadcast 9th February 2015 on 'E4' and a day later on Channel

He also featured on "Our Zoo" for BBC 1 and made his film debut in "The Cutting Room," footage horror film.

After posting a video on Instagram in August 2016, Parry Glasspool came in the highlight. In the video, he was seen wielding a knife while pretending to be a woman threatening to kill her boyfriend.

As a result, Glasspool was suspended from Hollyoaks for two weeks and was fined an indefinite sum.

He also apologized in June after making a joke about Daniel Dukakis; Love Island contestant looked like a date rapist.

Glasspool was rumored to be in a romantic relationship with Kieron Richardson, co-star in the British Channel 4 soap opera Hollyoaks. Well, Parry has not addressed the news yet. It also raised the question about his sexual orientation.

He has not shared about is dating life and affairs in the media. So, for now, it can be assumed that he is single and straight.

Parry's estimated net worth around a million dollars. A major source of his income is his acting career.