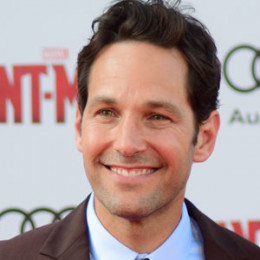 An American actor moreover ,comedian, writer, and producer, Paul Rudd is currently married to a television producer,Julie Yaeger. The couple married in 2003.Paul is a son of a historical tour guide and former vice-president of Trans World Airlines, Michael and sales manager of television station named KCMO-TV, Gloria. Rudd has acted in many television shows .He has many fans in social sites.

Paul Rudd is living a happy married life with his wife Julie Yaeger. The couple has two children. Darby Rudd is the name of his daughter, she was born in 2010. Jack Sullivan Rudd is the name of his son, he was born in 2006. There is no information about his affairs in social sites. Paul is a member of the Sigma Nu fraternity's Nu Chapter. Rudd has won a star on the Hollywood Walk of Fame award.

He married to a television producer, Julie Yaeger. The couple married in 2003.The couple has two children together.

Darby Rudd is a name of his daughter,she was born in 2010.