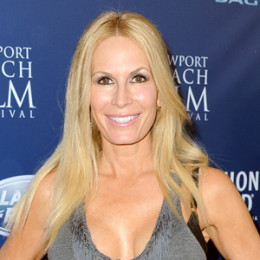 Peggy Tanous is a former fitness model and current actress who is best known for her work on The Real Housewives of Orange County. She is a married woman and is living a blissful life along with her husband and children.

Peggy Tanous is of Caucasian descent on March 30, 1970, in California. Tanous grew up along with her four siblings. She attended Foothill High School and graduated from Cal State Fullerton.

Tanous is a model turned actress. She is a well-recognized former fitness model. Apart from modeling, Peggy made her appearance in numerous music videos. She served as a spokesperson for Talent 6 before landing on her husband Micah’s website business spokeswoman.

Peggy’s fame rose to prominence level when she appeared in the sixth season of the popular TV series The Real Housewives of Orange County. Currently, she has made her appearance on several TV shows such as Destination HB and Destination report as a host.

Tanous is also a web star who has garnered more than 80,000 followers on Twitter. Her video along with her children entitled Total Body Workout with your Toddler gained her quite a recognition. Besides that, she is an advocate of When the Bough Breaks: A Documentary About Postpartum Depression.

The beautiful blonde Peggy is a married woman. She tied the knot with her husband Micah Tanous since June 10, 2005. Micah is an Internet Developer and CEO of Monarchy Holdings.

The duo dated for several years before deciding to uplift their relation to a new level. Not only the loving wife she is the responsible mother of her two children, London and Capri. Both her children are a child model working for several companies.

Peggy earns a lucrative amount from her career as a fitness model and TV actress. She holds the staggering net worth of $13 million as per The Richest and -$3 million as per Celebrity Net Worth.

Micha Tanous, the handsome husband of Peggy Tanous is an Internet Developer and CEO of Monarchy Holdings.

London is an adorable older daughter of Peggy Tanous and her husband Micah Tanous.

Capri is the beautiful younger daughter of Peggy Tanous and her lovely husband Micah Tanous.