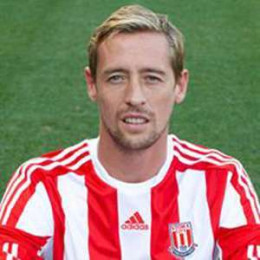 An English professional footballer, Peter Crouch is currently married to Abbey Clancy on 30 June 2011. He went to Hanwell's Drayton Manor High School. Peter started his career as a trainee with Tottenham Hotspur but he did not make any appearances for their first team. He plays as a striker for Premier League club Stock City and was capped 42 times by the England national team from 2005 to 2010, scoring 22 goals for his country in that time, and appearing at two World Cups.

Peter Crouch dated to model Abbey Clancy and on 15 July 2009, they announced their engagement. After two years of their engagement, they married on 30 June 2011.They had two daughters together named, Sophia Ruby, on March 2011 and Liberty Rose in June 2015. He was found guilty of speeding and ordered to pay a fine of $1,000. And he was also banned from driving for six months.

She is the first child of the couple named, Sophia Ruby,who was born on March 2011.She has one younger sister.

She is the second child of the couple named,Liberty Rose who was born on June 2015. She has one elder sister.