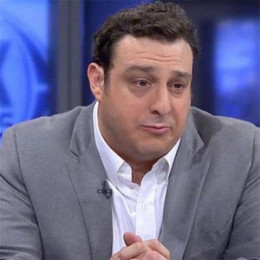 Petros Papadakis is American TV and radio personality recognized from the radio show, The Petros and Money Show on Fox Sports Radio where he co-hosts with Matt Smith. Before starting his broadcasting career, he was a football player and a captain of the University of Southern California Trojan.

Petros Papadakis was born on 16th June 1977 in the United States. He is American and belongs to White ethnicity. Papadakis' father John Papadakis raised him along with his sibling, Taso Papadakis (played at USC). His maternal grandfather, Dr. Emest Schultz used to play basketball for Trojans.

He finished his schooling at Christ Lutheran School and Palos Verdes Peninsula High School. Later, he graduated from the University of California, Berkeley. While in the university he played football.

Petros Papadakis decided to begin his career in football from the very early age. As he grew young, he planned to play for UCLA Bruins but was not recruited by them. He even took Cal Fall football training camp to improve his playing skills.

Later, Papadikas started playing for the University and scored 16 touchdowns for which he was awarded as a USC’s team captain. During 1999-2000, he faced several injuries and fractures due to which he had to take leave from the game.

In 2000, Papadakis made a comeback and scored a touchdown, and 11 carried on 29 yards and became the Most Inspirational Player of USC. He called himself ‘’the captain of the worst team in the USC history'’ as his team consistently lost many matches.

Papadakis gained his first experience in 1998 when he was at USC as a junior tailback. Even with his first attempt he grabbed much of appreciation and became one of the favorite interviewees in LA.

In 2001, he started his radio broadcasting career by co-hosting a weekly show, USC Insider with Pete Arbogast in KMPC-1540 AM. A year later, he became the sideline reporter for USC games and also hosted a show, Bonus Hour.

He left radio broadcasting in 2006 to focus on his TV broadcasting career. A year later, he again joined AM radio and co-hosted a show, The Petros and Money Show along with Matt ‘’Money’’ Smith. Also, he worked as a part-time public address announcer for USC men’s basketball team.

Papadakis also engaged on TV from 2002. He began his TV career on FSN as a sideline reporter for FSN’s High School Game of the Week and also hosted the USC Magazine Show.

Fox Sports Net hired Papadakis in 2004 and appeared as a commentator along with Barry Tompkins on national Pac-10 games. He then worked for several TV networks including KTLA, VH1, GSN, E! and others.

In 2005, he appeared as a guest on the CBS series, CSI: NY along with casts Gary Sinise, Melina Kanakardes, and Carmine Giovinazzo. He also served as an analyst for Fox Sports on FS1’s Fox Sports Live Studio show.

Petros Papadakis likes privacy when it comes to his love life. However, it is known that his wife is Dayne Zaoke-Papadakis. As per his wife's Facebook account, they exchanged their vows on 25th June 2009.

Papadakis finally spoke out something about his family in an interview in 2011 saying,

‘’ I’m married, and I go home at night, and my wife and I watch bad reality TV together.’’

He is also a father of his two adorable children. Despite his busy schedule, he somehow manages time for his family (wife and children).

Petros Papadakis, 40, earns a genuine amount from his multiple profession as a radio and TV broadcaster in various networks.

As per the records, the average salary of a broadcaster with 5-10 years experience has an annual salary of $40k. But, Papadakis has been in the field for more than 17 years, so certainly he makes more than that.

Papadakis also worked as a sports analyst and as per our research, a new entry analyst earns $68k per year.

Considering all the sources, Petros Papadakis might have an estimated net worth of seven-digit figure.

As per the Facebook account of Dayne Zaoke-Papadakis, she got married to her husband, Petros Papadakis on 25th June 2009. The couple is still together and rarely make an appearance in public together.