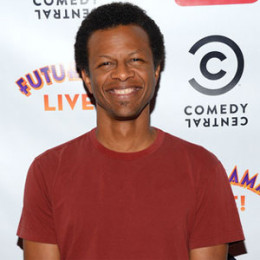 American actor and voice actor, Phil LaMarr graduated from Harvard-Westlake School in North Hollywood, and Yale University. He worked in many films such as Fronterz (2004) and Choose Your Own Adventure: The Abominable Snowman (2005). LaMarr also appeared in 'Spider-Man 2' as one of the riders standing behind Spidey as well as a boy who is trying to save the subway train. He played the role of "Mr. Sunshine" in the 2008 crime game 'Saints Row 2'.

Phil LaMarr has appeared as a regular character in the forthcoming web series 'Naught for Hire' produced by Jeffrey Berman and Farscape's Ben Browder. He also starred in and produced the comedy web series "Inside The Legend." LaMarr made a cameo appearance in the Will Ferrell film 'Step Brothers in which he has a character of a viewer of a house for sale with his wife. LaMarr is a married man with two children but information about his wife has not yet been disclosed.

The tremendously talented actor and comedian ‘Phil LaMarr’ was born in the city of angles ‘Los Angeles, California’ on January 24, 1967. He has provided his voice for many animated series, movies, and video games.

Phil did his graduation from Harvard-Westlake School in North Hollywood and Yale University. Yale provided him lots of opportunities; he played a crucial role in the British Comedy ‘Trevor’ organized by a university. He has also become a member of improve comedy group ‘Purple Crayon’ of Yale.

After graduating in 1989, he became the member of improve comedy group ‘The Groundlings’. Later LaMarr joined at ‘The Second City’ and ‘ImprovOlympic’ to studied improve.

LaMarr has voiced a character on the ‘Mister T’ cartoon show before his college. He was one of the nine original cast members of MADtv series (1995-2000) and his performance on the show was appreciated by the huge number of audiences. He has worked in more than 350 shows.

Besides this, he has been a voice of Star Wars franchise and ‘Family Guy’. He has also lent his voice in ‘Transformers Animated’ for several characters.

Phil is popular in movies too. He has appeared in many films including; Kill the man, Free Enterprise, Cherish, Manna from Heaven and much more. He was also seen in Spider-man 2.

Similarly, he has also performed the English voice over 2nd and 4th part of ‘Metal Gear Solid’ as well as he voiced the Ramza in the PSP version of ‘Final Fantasy Tactics: The War of the Lions’. He provided his voice over numbers of video games.

LaMarr is all set to play an impetus role in the series named ‘Naught for Hire’ which is produced by Jeffrey Berman and Farscape’s Ben Browder. However, the released date of series isn’t revealed yet.

Professional actor and voice actor ‘Phil LaMarr’ is a married man. He is enjoying his blissful married life with his beautiful wife and two children.

Due to his amazing work on animated series and video games he was honored with seven ‘Behind the voice actors’ awards’.

He is rising in his career with growing net worth of total $3 million dollars.